But the 73-year-old has spoken of his anguish of watching helplessly as his wife Sam, 34, endure a brutal six-year battle with infertility.

The couple, who live on the Gold Coast, have been trying to have a baby after spending more than $100,000 on IVF treatments.

Appearing on The Morning Show, the septuagenarian property developer revealed his desperate hope of becoming a father again. 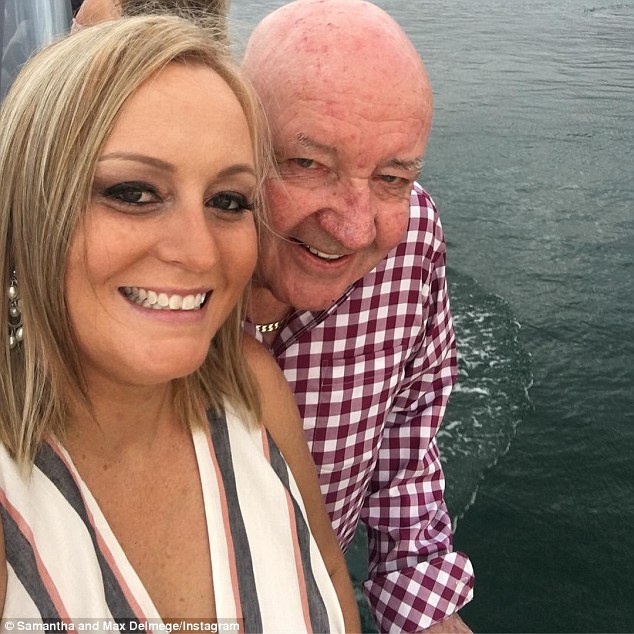 Septuagenarian millionaire Max Delmege, 73, has shared his anguish of his wife Sam’s brutal battle with infertility (pictured together)

‘I feel for Samantha, particularly when I see her give these injections, I can’t look, I get all funny when she does these injection procedures,’ he said.

‘At the end of the day, I worry of course that after she has the operations, I worry quite a bit about her. I feel for her having to go through this.

‘But again, I want children as well. Well I’ve got two boys from my previous marriage but I would like a couple of little babies running around the house.’

The father said he didn’t believe their 39-year age gap was affecting their odds of having a baby together.

‘Doctors have told her everything seems to be going normal. At the end of the day, we have these miscarriages… But we want a child or a couple if possible,’ he said.

‘They’re the most precious things you could ever receive in life. I just can’t wait to be a father again.’

Sam added: ‘We have also been told from the lab that issue [age gap] is completely not a problem for what’s happening in our journey.’

Their television interview comes just weeks after Sam offered a poignant account of her turbulent struggles of having a baby against the ever-decreasing odds. 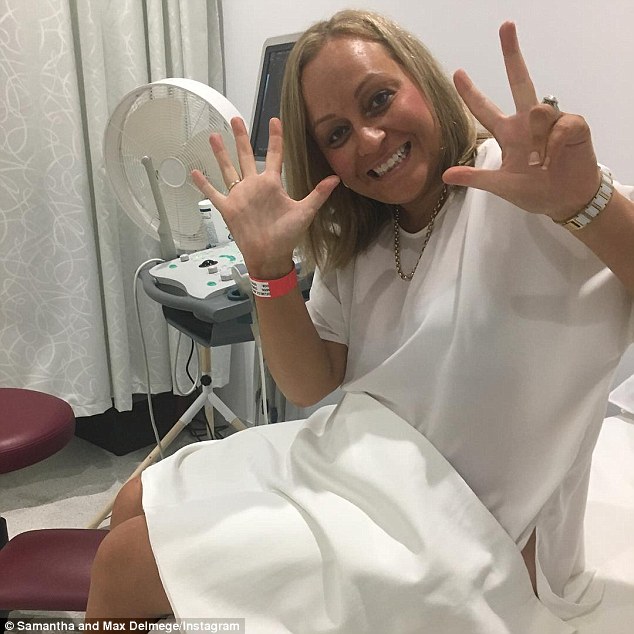 For the past six excruciating years, Sam Delmege (pictured) tried desperately to have a baby

‘When we finally sought help in 2015 I was told ‘you’ll get pregnant more then likely first go’. I was so excited that finally it could all be over. Finally my dream.

‘That cycle was an absolute failure.’

But when she finally fell pregnant for the first time in April last year, she lost her unborn child at just six weeks.

Three months later, the pair — who married in 2015 — were delighted to discover they were expecting twins but Mrs Delmege tragically suffered a double miscarriage.

‘My whole life was shattered that year,’ she said. 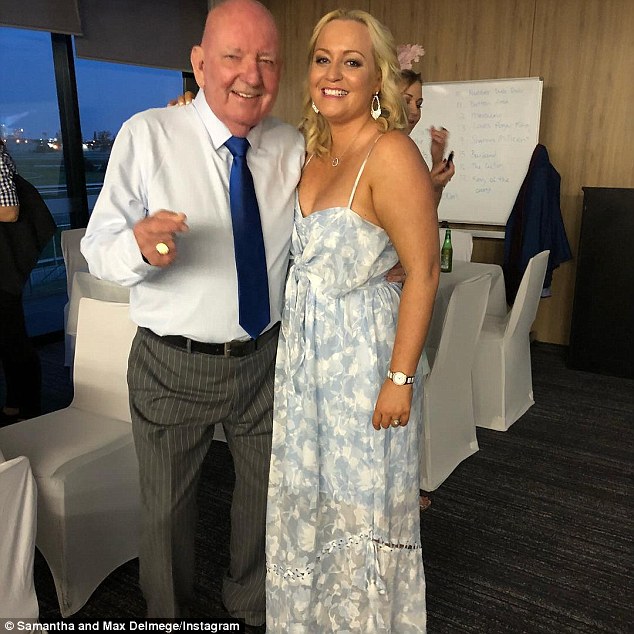 Despite her multiple failed IVF cycles, Mrs Delmege has been able to find the strength to overcome the heartbreak.

‘I was dealing with some heavy losses, so much hatred towards myself, high anxiety levels, stress and all the while getting up, going to work, carrying on with life as if nothing was happening.

‘I am still deeply hurting. Each and every single day. It’s the bane of my existence.

‘Most days people wouldn’t know what’s going on in my head. I smile, I laugh and I pretend I am okay. Most days I think I disguise well my true feelings.

‘I am still trying to keep that spark in there. Samantha, the happy go lucky girl, with minimal cares in the world, always wanting to have fun and a joke. That girl.

‘I often see glimmers of her but then she disappears when I am quickly reminded of my day to day torture. My life that currently still is.’ 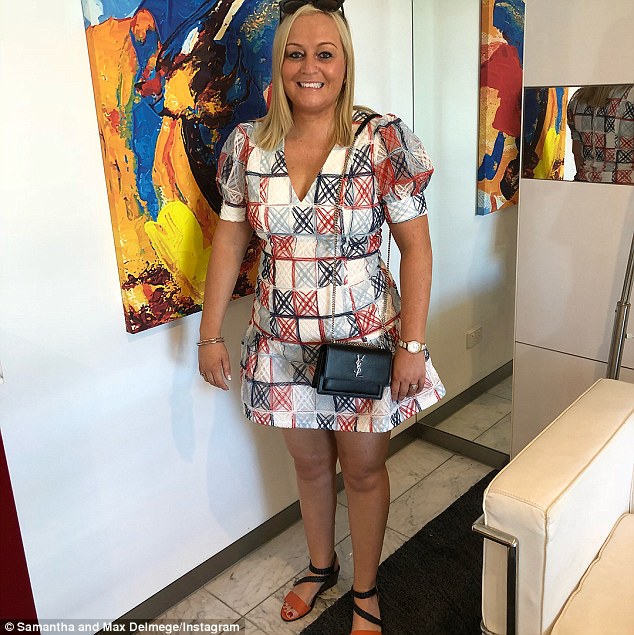 Despite her multiple failed IVF cycles, Mrs Delmege has been able to find the strength to overcome the heartbreak

As the couple tried desperately to conceive a baby over the years, Mrs Delmege said it was hard to watch those around her fall pregnant so easily.

‘While you’re happy for people, deep down there is a pain that aches, yearns and is desperately wishing it was you sharing that news, feeling those feelings, having morning sickness, watching a belly grow, feeling a baby kick, watching them move and wave at scans. But, each month it isn’t you,’ she said.

You know the feeling I hear of unconditional love, the feelings of watching a human you created grow? That’s why I’m doing this

She explained the reason behind why she dreams of becoming a mother.

‘That’s why every day of every month for the last six years I have put myself through injections… steroids, the weight gain, the money loss, the heart ache, the miscarriages, the hope, loss of sleep and lack of self confidence. All to have those exact same feelings that you do, looking at your child.’ 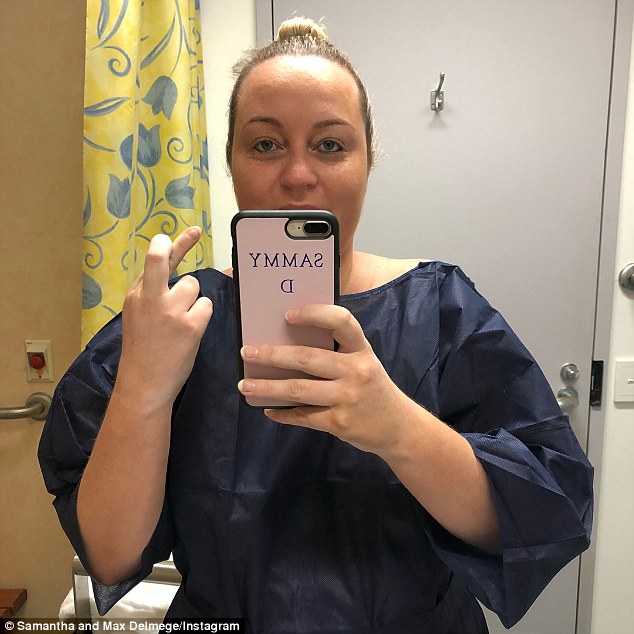 Determine to fall pregnant, the 34-year-old nurse from Sydney said she’s not giving up just yet 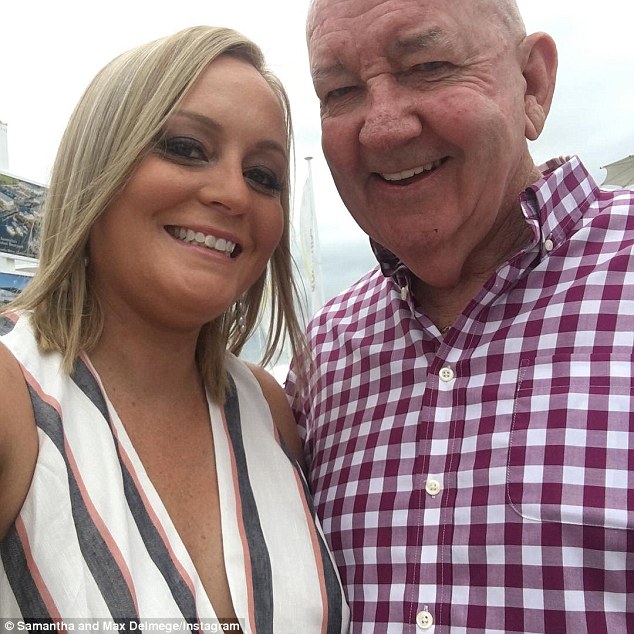 As the couple tried desperately to conceive a baby over the years, Mrs Delmege said it was hard to watch those around her fall pregnant so easily

‘Will I ever experience these same feelings? I am not sure. Wouldn’t it be great to have a magic ball telling us what our future holds. While I know right now my immediate future is unsure I hope my long term one has blessings with a baby.’

Determine to fall pregnant, Mrs Delmege said she’s not giving up just yet.

Despite all my losses, 18 embryos, I still feel that glimmer. I still see a future with children

‘If out of all of this I can praise myself for something it’s for the determination of never giving up. Living with that glimmer of hope that my time is coming,’ she said.

‘Despite all my losses, 18 embryos, I still feel that glimmer. I still see a future with children. I never knew how much determination and resilience I had. No one knows how much pressure they can handle until handling it is your only option.

‘Never underestimate the power of wanting something so desperately. What we will put ourselves through to achieve that dream.